Can Rabbits Eat Bell Peppers? The Ultimate Guide to This Nutritious Low-Calorie Snack

Chances are, you might have seen online videos of rabbits eating bell peppers. The crackling sound of rabbits chewing and biting these bell peppers is highly entertaining, and they seem to enjoy it. But, of course, this probably makes you want to give them to your bunny!

Bell peppers are crunchy and refreshing and grow in multiple varieties. But given that bunnies have delicate digestive systems, you may wonder if bell peppers are really safe for them to eat.

This article provides a thorough guideline for understanding the impact of feeding rabbits bell peppers and the health benefits. In this article, we will cover the following:

If you’re considering including bell peppers in your bunny’s diet, read on because we have all the important information!

Yes, rabbits can eat bell peppers because these snacks have a high nutrient content and a low caloric value compared to most other treats. All parts of bell peppers are safe to eat, although the core, seeds, and leaves aren’t easily digested, so you should remove them.

Moderation is essential when feeding bell peppers because of their sugar content.

To maintain a healthy balance, bell peppers should only supplement a rabbit’s usual diet of hay and leafy greens.

While most bell peppers are safe for rabbits, there are a few situations where you need to exercise caution. Keep these points in mind, so you can feed bell peppers to your rabbits safely.

Feeding peppers to rabbits will boost the rabbit’s diet. However, you shouldn’t let baby rabbits eat sweet peppers because of their sugar content. Instead, consider peppers for rabbits as a treat for adult bunnies.

The core of the bell pepper and its seeds have no nutritional value. While the core and the bell pepper seeds are not toxic, they are indigestible, and could cause some digestive issues.

It’s safer to remove the core before the rabbits eat the bell peppers accompanied by leafy greens.

The pepper leaves are not toxic, but are not comparable to the bell pepper’s juicy taste! Given the choice, rabbits will focus on eating the sweet crunchy peppers!

If your rabbit likes the taste of pepper leaves, there’s no need to stop them as there are no adverse effects.

Unlike bell pepper, hot peppers like jalapeno peppers, cayenne, habanero, and chili peppers for rabbits can cause complications.

Hot and spicy foods could harm your bunnies because their digestive system is sensitive to these substances, so don’t let your rabbits eat jalapeno peppers.

Types of Bell Peppers You Can Feed Your Rabbits

So, if you are wondering if rabbits can eat green peppers, the answer is yes, provided you stick to the recommended daily amount.

Red bell peppers may have the highest sugar content, but they are still safe for rabbits in moderation. Wash the red pepper well and remove the seeds and the pepper cores before feeding your bunny.

Remember that red peppers should only be given occasionally as treats.

Orange bell peppers are sweet and attractive to rabbits. However, be careful and feed your bunny orange peppers only once a week.

Yellow bell peppers are an ideal treat for pet rabbits because they contain water and vitamins and taste delicious.

As with orange peppers, the sugar content means you should give yellow bell peppers in moderation.

These peppers resemble bell peppers but are not spicy, making them safe to feed rabbits. They can be a wonderful supplement to the rabbit’s diet because they include the same nutrients and vitamins.

Feeding Bell Peppers to Your Rabbits the Right Way

The question of can rabbits eat peppers boils down to the amounts you give your bunnies. Rabbits are considered concentrate selectors, meaning they will choose nutrient-dense plants in the wild. You should mimic this approach when feeding your pet rabbits green vegetables.

In addition, plenty of fresh hay can balance out the small treats desirable for a rabbit’s digestive tract.

If you’re feeding your bunny bell pepper for the first time, do it slowly.

As a precaution, once you provide pepper leaves or bell peppers, look for any negative reactions and seek immediate help from the vet if these issues arise.

Gradually increase if there is no sign of indigestion, such as diarrhea and constipation.

The size of your rabbit should determine the amount it can eat.

These amounts should be used no more than once per week, and never on two consecutive days.

Bell peppers and other non-leafy vegetables should only make up 10% of the rabbit’s diet and should not overshadow grass hay and leafy greens for a balanced diet.

You should inspect bell peppers for pests or rot to detect expired peppers before rabbits eat them.

Additionally, if the rabbit fails to eat the peppers within 12 to 24 hours, clean its habitat to keep the space hygienic. This will prevent the rabbit from feeding on rotting, uneaten peppers.

Then, remove the core and seeds and chop the pepper into pieces. You’re ready to share a treat with your bunny!

Rabbits can eat bell peppers, provided they’re washed properly and provided in appropriate amounts. Don’t let rabbits eat pepper seeds or spicy jalapeno pepper varieties. The majority of your bunny’s diet should be hay and leafy vegetables, but feeding bell pepper can add a welcome treat for your furry pal.

If you found this article helpful, you can share it with your family and friends that have bunnies. Also, if there are any questions, feel free to comment below. 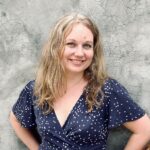 Kathryn Dench
A rabbit-enthusiast-turned-veterinarian, Kate takes a science-based approach to her recommendations for rabbit care. She draws on over ten years of experience in veterinary clinics to offer practical tips, tricks, and warnings for rabbit owners the world over, to help pet rabbits live happy and healthy lives.