Rabbits may be some of the smallest pets, but they’re packed with personality! Bunnies express their feelings through an extensive vocabulary of behaviors and body language.

Whenever I’m volunteering at the animal shelter, and I rehome a bunny with first-time rabbit parents, I look forward to following up with them in a few weeks. The family is always surprised and delighted at how expressive their rabbit has become and how many emotions the bunny communicates using nuzzles, grunts, and gestures.

Studying rabbit body language will help you develop a closer relationship with your pet. This article describes a variety of common rabbit behaviors so you can interpret when your rabbit is feeling curious, social, relaxed, or alarmed.

As an example, rabbits show pleasure by diving into play. A leaping, digging, or nesting rabbit feels safe and happy. Relaxed, contented rabbits will lay their ears back, snuggle into a “bunny loaf” position, or even flop on their sides. Bunnies communicate fear by freezing and stamping their hind feet.

Body Language of a Curious Rabbit

When a rabbit finds himself in new surroundings, he’ll explore by stepping forward cautiously and bobbing his head up and down. He may stretch his nose out as far as he can, sniffing and nuzzling while leaving his hindquarters fully anchored for a quick retreat.

A rabbit’s usual gait is a loping hop, but a bunny that’s investigating may creep or even tiptoe forward while he assures himself that the place is safe.

A rabbit’s investigation of a new home may also include “periscoping.” This is when a rabbit stands up on its hind legs to get a better view of its surroundings.

Periscoping is an adorable rabbit behavior, reminiscent of a dog’s begging, but it has an entirely different motive. The bunny is trying to get a birdseye view of the scenery to make judgments about his next move.

The ears of a periscoping rabbit will angle forward curiously or may swivel to catch a sudden noise.

As a rabbit becomes more comfortable with a new environment, he’ll move beyond sight and smell to interact with his surroundings through taste and touch. If a rabbit licks you, nuzzles you, or even pushes you out of the way with his nose, it means he’s accepting you as part of his world – the world he thinks he owns.

The binky is a rabbit’s expression of pure joy. You’ll only see this one when a bunny has been out of its cage for a while and is running around full of energy. The binky is a scrambling, magnificent leap into the air, often with a twist. Sometimes a rabbit will do a double or triple binky if it simply cannot contain its excitement.

Rabbits love to play by digging and shredding. Hay, cardboard, carpet, sand, flower pots… nothing is safe, so be sure to bunny-proof your home!

Nesting is different from shredding or digging. A nesting rabbit isn’t shoving straw around for fun; it’s building with a purpose. A nesting rabbit will pack as much hay into its mouth as it can possibly hold, then hop around while deliberating about where to place it. It may even pull out its fur to line the nest.

In a spayed or neutered pet rabbit, nesting is not a concern. Your bunny simply decided to build a nest for comfort.

However, in an intact female, nesting can be a sign of a hormone imbalance and a “false pregnancy,” where the rabbit has the urge to build a nest even if she’s not expecting a litter. Or it could mean that your rabbit is actually pregnant. If you see an intact rabbit nesting, consult a veterinarian.

Rabbits love to be tidy. A bunny will often wrap up playtime by treating herself to a grooming session. She’ll bat the dust off her front paws and thoroughly lick every shaft of fur that she can reach – even at the tip of her tail.

The loaf. The bunny slipper. The roosting hen. There are a handful of popular names for the fluffy ball that a comfy rabbit may settle into after a meal or a bath. Loafing rabbits tuck their front feet under their bodies and snuggle into a relaxed pose with their ears laid across their flat backs.

Tip: The “loaf’ is different from hunching. A hunched rabbit sitting with an arched back and all four feet on the ground may be experiencing GI distress. Consult a veterinarian immediately.

A rabbit who is hanging out in the “bunny loaf” position will often chatter its teeth. This soft rapid chewing motion is the rabbit equivalent to a purr. It simply means he is comfortable and at ease.

Don’t confuse chattering with teeth grinding. True teeth grinding is a sign of pain. I’ve only heard it once in my 22 years of keeping rabbits, but it’s an absolutely terrible sound.

Rabbits flop over on their sides for one of two reasons. One reason is to beat the summer heat. If it’s a warm day and your outdoor rabbit is lying on its side, with or without its head on the floor, check for signs of heat stress (panting, wet nose) and take action.

In an indoor rabbit, flopping just means that your bun is uber-relaxed and ready to chill – or even take a nap.

Rabbits mount each other to establish dominance. If you have a pair of fixed rabbits that are mounting each other, you should keep an eye on the situation but not necessarily intervene.

If you have a pair of female rabbits that aren’t spayed, there’s a greater chance that mounting could develop into aggression. (You should also double-check that they’re both females.)

No, your rabbit isn’t scratching an itch when he rubs his chin on his bowl, cage, or toy. He’s marking his territory. Rabbits have scent glands on their chins that they use liberally to swathe their belongings in their own musk.

That means it’s the ultimate sign of acceptance when a rabbit rubs his chin on your hand!

If your rabbit comes up to you and lays her chin on the floor, she’s probably asking you to rub her forehead. Many bunnies love it when you stroke their heads, chins, and ears.

I had a rabbit, Kayla, that would follow me around nudging and grunting at me, and when she had my attention, lay her chin on the floor and silently (but very persuasively) demand that I pet her.

Running Circles Around Your Feet

Many people say that when a rabbit runs circles around your feet, he’s asking to be picked up. I’m not convinced this is true. Circling is a mating gesture. Your rabbit is marking you as his possession. This is especially true if circling is accompanied by tail flicking and low, nasally honks.

If a rabbit is really displeased by something that happened, but not actually afraid of it, he will hop away quickly “shaking the dust off his feet.”

When a rabbit opens his eyes so far that you can see the white third eyelid, this means that he’s terrified. Don’t try to handle him. Simply let him calm down in a quiet, dark space until the perceived threat has passed.

In my experience, freezing happens most often when a rabbit hears a sudden, unidentified and scary sound. Imagine a hawk cry. A rabbit will crouch as low in the grass as he can, hoping he’s invisible, poised and ready to run.

The character Thumper, from Bambi, made this rabbit gesture famous. But he also portrayed it incorrectly. Rabbits do stamp their large hind feet, but they do it, not out of happiness, but to sound an alarm.

Rabbits will often stamp their feet, one loud thump at a time, when they sense danger but aren’t sure what other action to take.

Rabbits that obsessively gnaw the wire of their cage are usually bored, don’t have enough hay, or don’t have good chew toys. This behavior problem can lead to malocclusion, or teeth pulled out of alignment.

Bunnies are generally quiet animals. But they can make noises. A rabbit that grunts at you is usually warning you not to touch her right now.

But grunting can also be a way to ask you for something. My bunny Kayla, whom I mentioned above, would grunt to get my attention and insist that I pet her. I’ve also had rabbits that would grunt to ask me to open the cage door for them.

If you try to touch a rabbit that is grunting angrily, you might get boxed by a bunny. It sounds cute, but it’s not.

Rabbits that are feeling threatened will retreat to a corner of the cage. If you invade, they may lunge at you with bared teeth and threatening grunts.

If your rabbit is normally happy and suddenly gets grumpy and boxes you, this could be a sign it’s not feeling well.

Nipping is when a rabbit lightly pinches your finger to communicate that he wants something or that he wasn’t pleased with what you just did.

Truely aggressive biting will draw blood and is unmistakable.

Rabbits that haven’t been fixed will mark their territory with urine. This is a difficult behavior to correct if you choose not to spay or neuter your rabbit at a young age.

Rabbits have an array of complex and entertaining behaviors. But when you bring a new bunny home, he will need to settle in for a while before he feels comfortable displaying his full personality.

Treat your rabbit like any other friend. Offer your friendship and give him space to express himself. 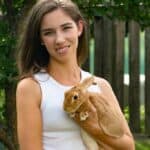 Ellyn Eddy
Ellyn has been rescuing, raising, and writing about rabbits for two decades and loves to help others discover the joy of rabbit care. Her favorite rabbit color is black. She thinks the cutest part of a bunny is the fluffy space right between its ears.