How Smart Are Rabbits? The Answer May Surprise You!

By Ann-Marie D'Arcy-Sharpe
Published on November 21, 2022

Rabbits are adorable, and they make great pets, but have you ever wondered ‘how smart are rabbits’? Although they don’t have a reputation for being clever, rabbits are actually very intelligent!

Many of the rabbits I’ve worked with were well-trained, and my own rabbit would even come when you called him! This isn’t unusual. Lots of bunnies are trainable in a similar way to dogs and cats.

Let’s take a look at just how smart rabbits are and how their intelligence compares to other pets. We’ll also talk about how much they can understand their owners and how to train them.

How Smart Are Rabbits?

Both wild and domestic rabbits are very intelligent. They have distinct personalities and know what they like. You can train pet rabbits to use a litter tray, respond to commands, and some can even do tricks! This intelligence is one of many reasons that rabbits need plenty of space, lots of attention, and mental stimulation.

You might be wondering how we can tell that rabbits are intelligent. Intelligence comes in many forms, and there are lots of rabbit behaviors that show us just how clever they are. The Rabbit Welfare Association and Fund state that rabbits are sentient, sociable mammals with a wide range of complex and dynamic behaviors.

Being able to develop social bonds is a significant sign of intelligence. Wild rabbits live in towns of up to 50 bunnies! Domestic rabbits form bonds with their owners and other rabbits they live with. They can understand social cues and adapt their behavior accordingly.

Many owners find that their rabbit can recognize their emotions. For example, if their owner is upset, rabbits will often come and cuddle with them to provide comfort.

Some rabbits even form bonds with other pet species in the home. My rabbit and one of my small dogs were very close. They would play together and snuggle together (always supervised, of course).

Rabbits communicate with other rabbits and their human owners using body language and vocalizations. They do this to tell us how they’re feeling. For example, if a rabbit is happy, they’ll often binky. A binky is a joyful, energetic jump into the air. If your rabbit thumps their back feet on the ground, this is a sign of unhappiness or an indication that they sense danger. Being able to express their feelings this way is a clear sign of intelligence.

Often bunnies will ask for what they want, indicating a deep understanding of their needs and how to express them. They might push against you or lower their chin to the ground when they want you to pet them. I used to look after a rabbit who would nudge his food bowl with his nose when he was hungry.

If you’ve owned a rabbit, you’ll know that they often get very excited when you walk into the room. They may run towards you and seek your attention. Yet most rabbits wouldn’t do this with a stranger. This shows that they recognize their owner and have formed a strong bond.

In the wild, rabbits remember routes home to escape predators quickly. They also remember which foods are safe and where to hide.

Domestic rabbits remember foods they like and dislike. They’ll eagerly take foods they enjoy and disregard foods they aren’t impressed with. Pet bunnies can even remember commands which we’ll talk about later.

Rabbits have a genuine curiosity about the world. They tend to be curious about new people, places, and animals. This curiosity shows that they’re paying attention to their environment and are interested in what’s happening around them. If you change their living area around or give them a new toy, they’ll spend a while sniffing and investigating.

When I say that rabbits understand the time, I don’t mean that they can look at a clock and tell what time it is. That would be quite a trick! However, rabbits do have an innate understanding of time by picking up on environmental cues. Evidence of this is that they’re crepuscular, meaning they’re most awake and active at dawn and dusk.

Like dogs and cats, rabbits get used to when you’ll feed them and when they’ll see their owner. If you feed them at the same time every day and you’re late one day, you’ll likely notice them waiting. They might even get a bit grumpy. Similarly, if you come home from work at a specific time each night, you might see your rabbit alert and waiting for you.

Rabbits are prey animals, so they naturally have a sense of what’s dangerous and what isn’t. In the wild, they know how to keep themselves safe for the most part.

In a domestic setting, rabbits learn to trust their owners even though we’re much larger than they are and are potential predators. They are cautious at first but soon understand that their owner is there to help them and not hurt them. This shows that they understand what’s happening around them and make conscious decisions about which situations are safe.

When you meet a bunny, you quickly pick up on the fact that they have a defined personality. Every rabbit is different, with varying likes and dislikes. Some rabbits are pretty calm and love to snuggle, while others have a lot of energy and prefer to play.

Bunnies often develop stronger attachments to certain people and dislike others. If they weren’t intelligent creatures, these differences wouldn’t exist.

Wild rabbits exhibit plenty of behaviors that show intelligence. We’ve already mentioned that they can memorize safe routes to return home and find places to hide from predators. They also build elaborate burrows known as warrens.

Warrens consist of a highly complex network of tunnels and chambers. The Royal Society for the Prevention of Cruelty to Animals explains that these warrens can be up to 3m deep and 45m long, some covering more than 2 acres. This fantastic engineering shows great intelligence!

Are Rabbits More Intelligent Than Other Pets?

Comparing the intelligence of different species is difficult, as they’re intelligent in different ways. There is little evidence to show whether rabbits are as smart as other pets, but we’ll take a look at the basics.

Are Rabbits Smarter Than Dogs?

In some ways, rabbits are as smart as dogs, but probably not smarter. They have emotions just like dogs. Both rabbits and dogs can interact with their owners, understand human words, and you can train them. However, they’re clever in different ways.

In theory, dogs may be seen as smarter because they understand more human words and are easier to train.

Are Rabbits Smarter Than Cats?

Many people feel that rabbits are just as intelligent as cats. Both species connect with their owners and are social. Yet rabbits are typically more eager to please and are often more curious. This means that rabbits are usually easier to train.

Are Rabbits Smarter Than Guinea Pigs?

Rabbits are generally thought to be smarter than guinea pigs. Rabbits understand their owner’s emotions more clearly and can respond accordingly. Bunnies can also be trained more easily than guinea pigs and understand more commands.

Both domestic and wild rabbits have a similar level of intelligence. Yet, due to their life experiences, their intelligence develops differently. Wild rabbits are more aware of their surroundings and have a stronger survival instinct.

Domestic rabbits don’t have the same survival tools as wild rabbits because they don’t need them. Instead, they’re more intelligent in a home setting. They can connect with humans, be trained, and learn to understand us.

Does Your Rabbit Know What You’re Saying?

Over time your rabbit will get to know specific human words, like their name. They’ll also pick on words that relate to actions. For example, they might understand ‘dinner time’ means they’re getting food. However, they won’t understand entire sentences or everything you’re saying.

Just like dogs and cats, your rabbit will understand your tone of voice. If you speak calmly, this can reassure and soothe them. If you are talking in an excited voice, they know something fun is about to happen!

Can Rabbits Be Trained?

Many people are surprised to learn that rabbits can be trained. They can learn to come when they’re called, to follow simple commands, and to do tricks. Some rabbits can even learn to do agility!

Litter training is one of the most valuable things to teach your rabbit. It helps to keep your home hygienic and makes cleaning up after your bunny easier.

If you’re planning to train your bunny, take your time and be patient. Use lots of positive reinforcement, such as praise and treats. The key is to repeat the training process over time, but in short bursts, so they don’t get bored.

Are Some Breeds Smarter Than Others?

Opinions vary as to whether some breeds of rabbits are smarter than others. Each rabbit is an individual, and intelligence can differ even within the same breed. How smart an individual rabbit is may depend on the human interaction they’ve had and the training they’ve been given.

Many people feel that the following breeds are the most intelligent and eager to learn:

Although there’s no specific way you can test your rabbit’s IQ, there are lots of fun games you can play to help you figure out how intelligent your rabbit is. Puzzle games are also mentally stimulating for your bunny, which is great for their well-being.

If you’re looking to buy a puzzle game for your bunny, my top three recommendations are below. My rabbit Hopkins loved all three and played with them a lot over the years.

If you want to make a game at home, you could use three or four plastic containers with treats hidden under one of them. Let your rabbit sniff around and try to tip the containers over. When they find the one with the treat under it, give them lots of praise.

Any game that gets them thinking and involves food works well!

Rabbits are highly intelligent animals. You can train them, and they form strong bonds with their owners. Plus, let’s face it, they’re adorable! You can check out the recommended products above if you want to test your rabbit’s IQ.

If you have any questions or ideas for homemade IQ games, feel free to comment below.

Remember that rabbits make great companions, and with the proper care, their intelligence can grow! 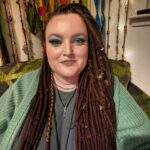 Ann-Marie D'Arcy-Sharpe
Ann-Marie has studied, worked with, and owned many animals over the years. Rabbits are a personal favorite of hers! When she’s not writing, you’ll find her out on adventures with her dogs.